SCROLL DOWN FOR IMAGES.

CLICK ON IMAGE TO ENLARGE; DATE OF PUBLICATION WILL APPEAR IN IMAGE VIEWER

In her authoritative history of Toronto tabloids of the inter-war period, Susan E. Houston traces the history of Hush, launched in 1927 under the editorship of Strathearn Boyd Thomson, a member of Toronto’s social elite.  Thomson’s version of Hush lasted until 1937; it subsequently passed through a series of editors and new titles (like Hush Free Press) and survived into the 1970s.  Houston’s article outlines the antecedents of Hush, in Canadian muckraking and scandal-mongering papers like the original Calgary Eye Opener and Jack Canuck.  Much of the research on Hush and other Canadian tabloid-like papers has been carried out by historians of LGBTQ life in Canada, who find, in these papers’ exposés of  the places and practices of queer sociability, some of the only available evidence about queer life in Canadian cities.

Under Thomson’s editorship, Hush combined hard-hitting coverage of city governance across Canada with the sorts of vice exposés typical of tabloid papers elsewhere.  In 1931 and 1932, Hush was particularly concerned with corruption in Winnipeg, publishing a great many front page stories documenting the vice industries in that city and calling to account municipal leaders and law enforcement agencies.  Irregular columns on Montreal, Hamilton, Ottawa and other cities, along with stock market tips and strings of brief gossip, rounded out each issue.

This gallery features many issues from 1931-1932, and scattered issues from later in Hush’s life.  Like other local tabloid newspapers, Hush added photographs and colour in the 1940s, and in the post-war period, while it continued to cover Toronto, its competition was more and more the continental supermarket tabloids exemplified by the National Enquirer.

BACK TO PRINT CULTURE AND URBAN SENSATIONALISM MAIN PAGE 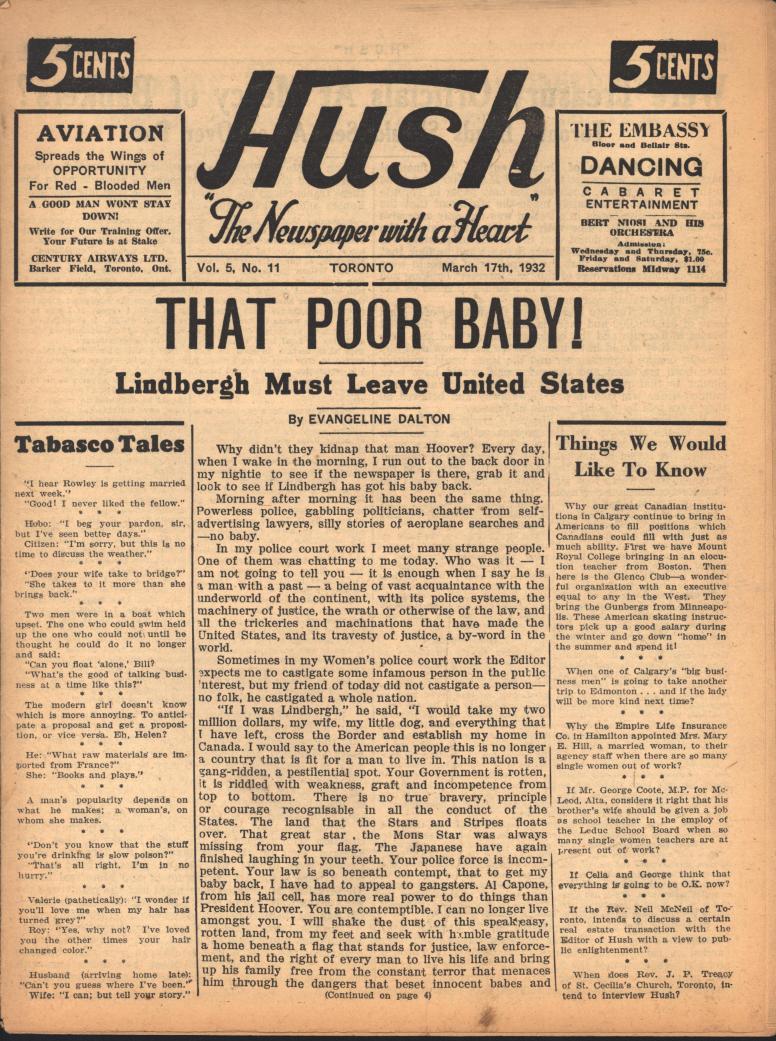 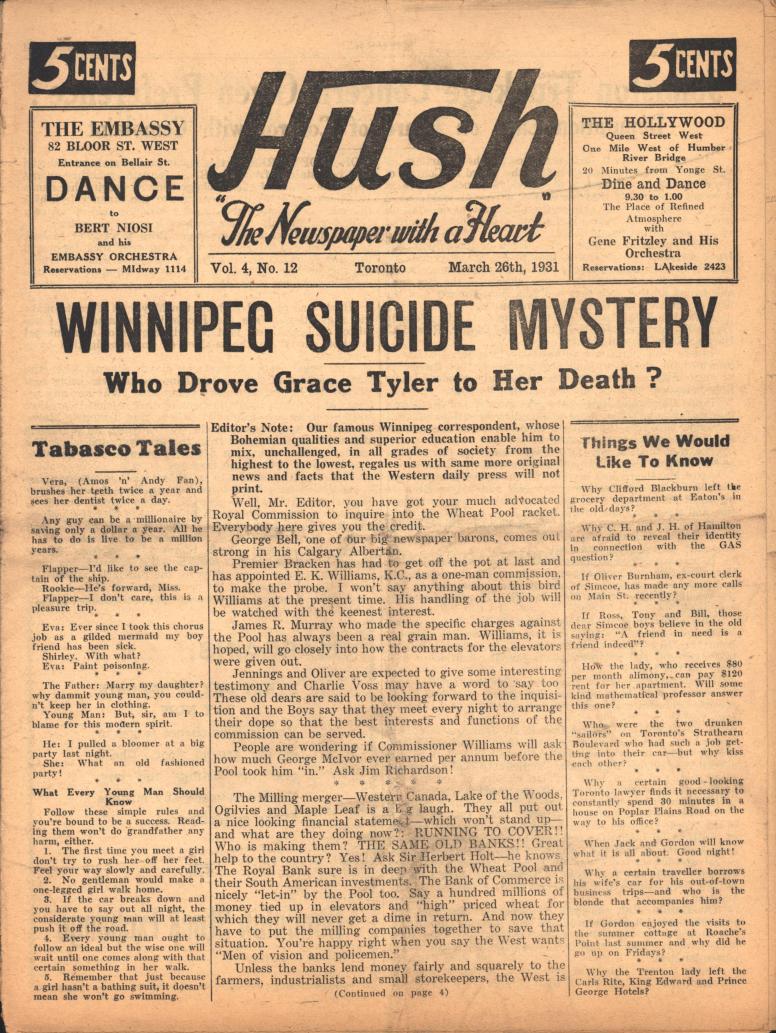 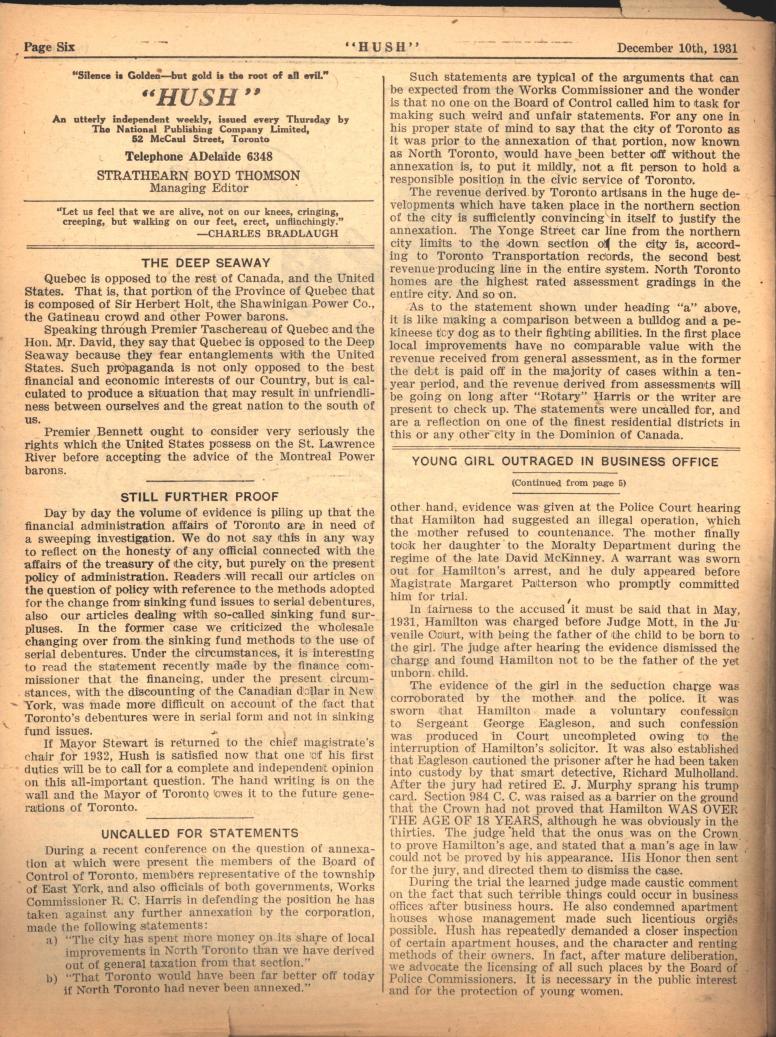 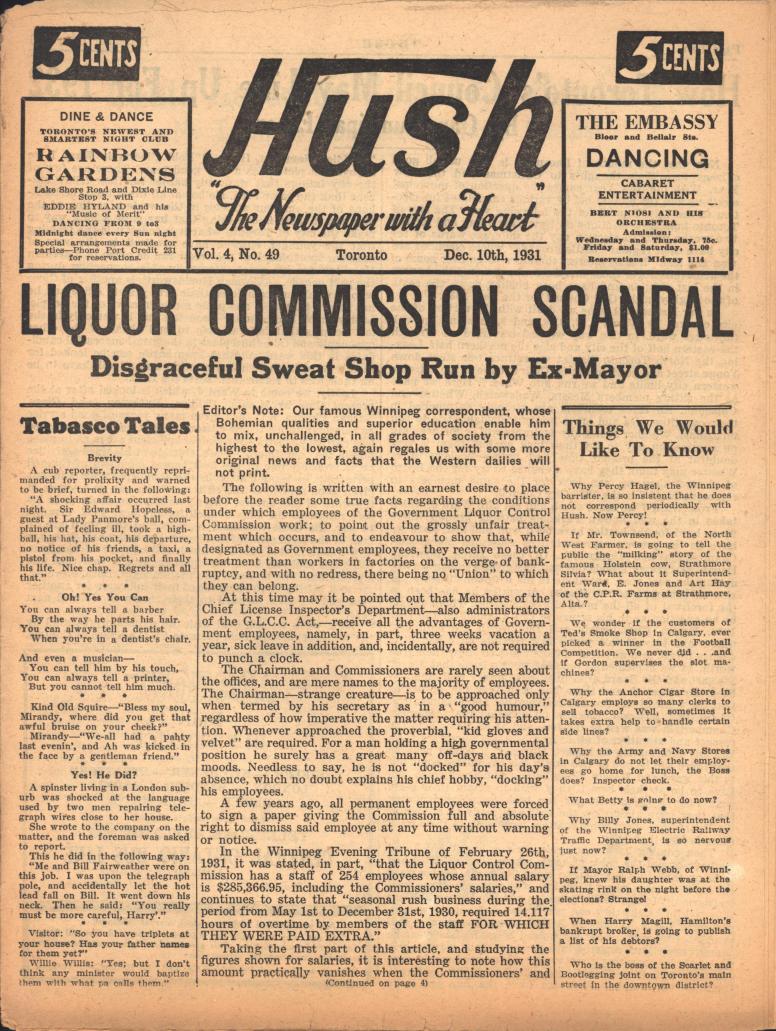 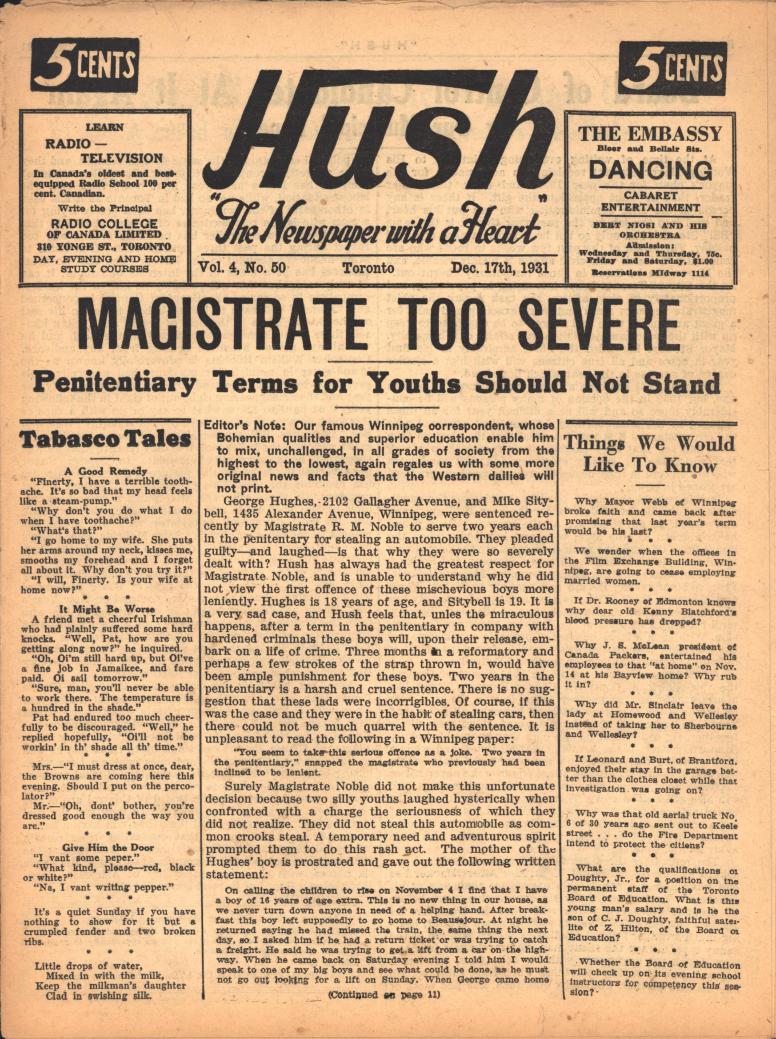 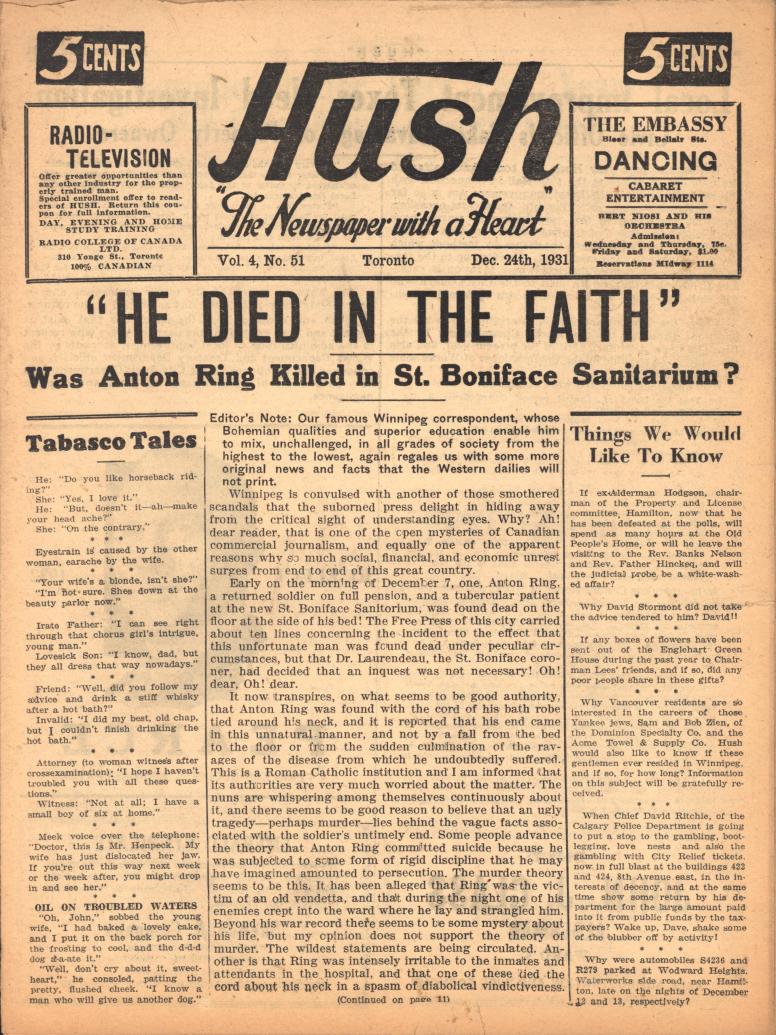 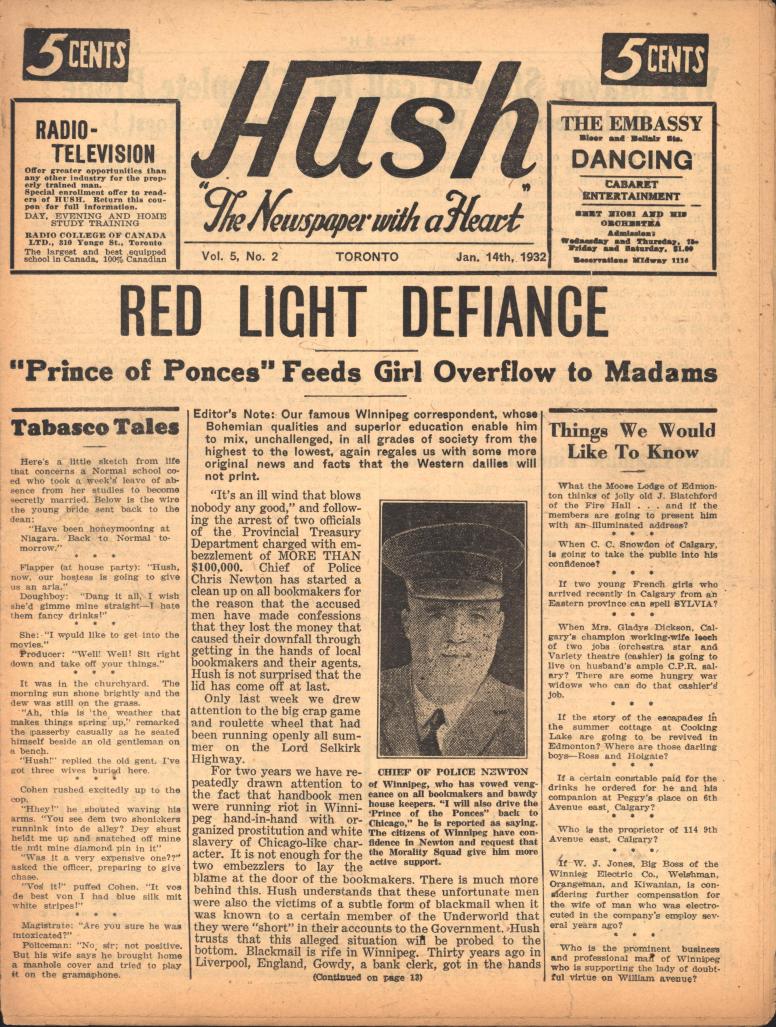 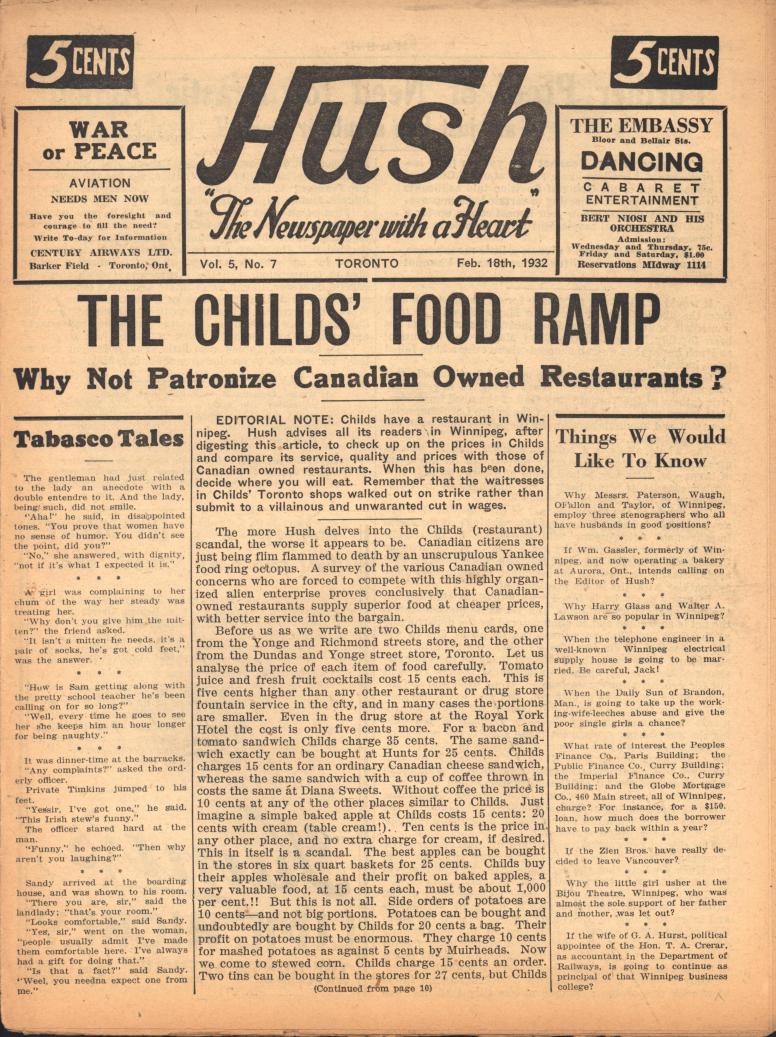 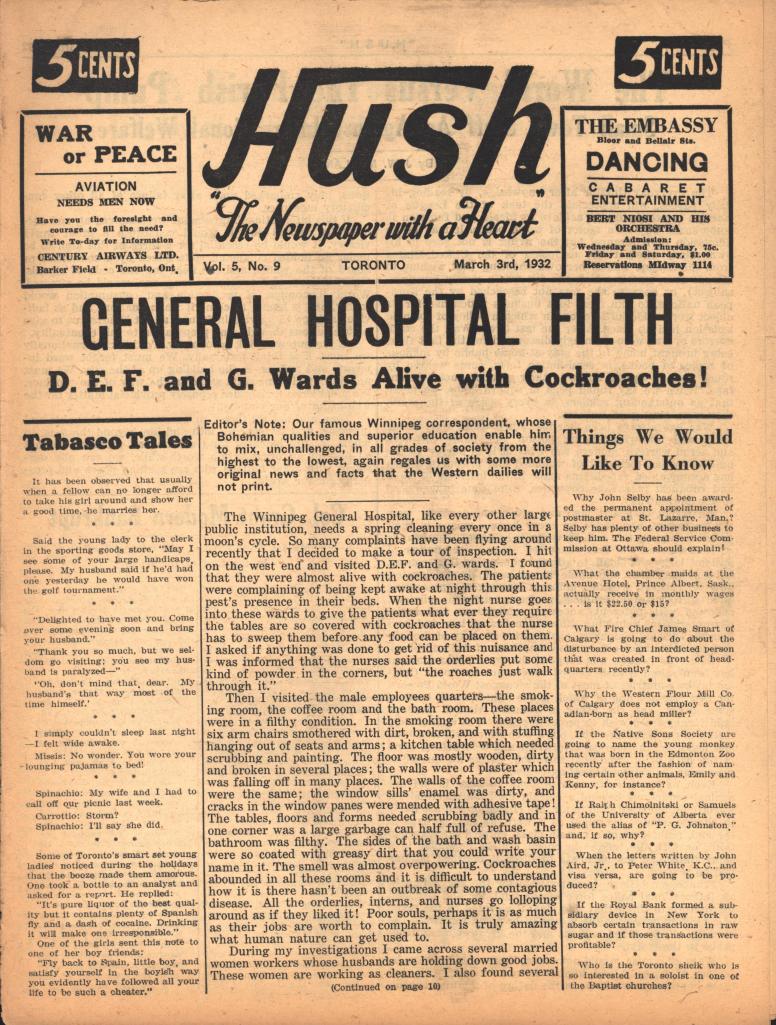 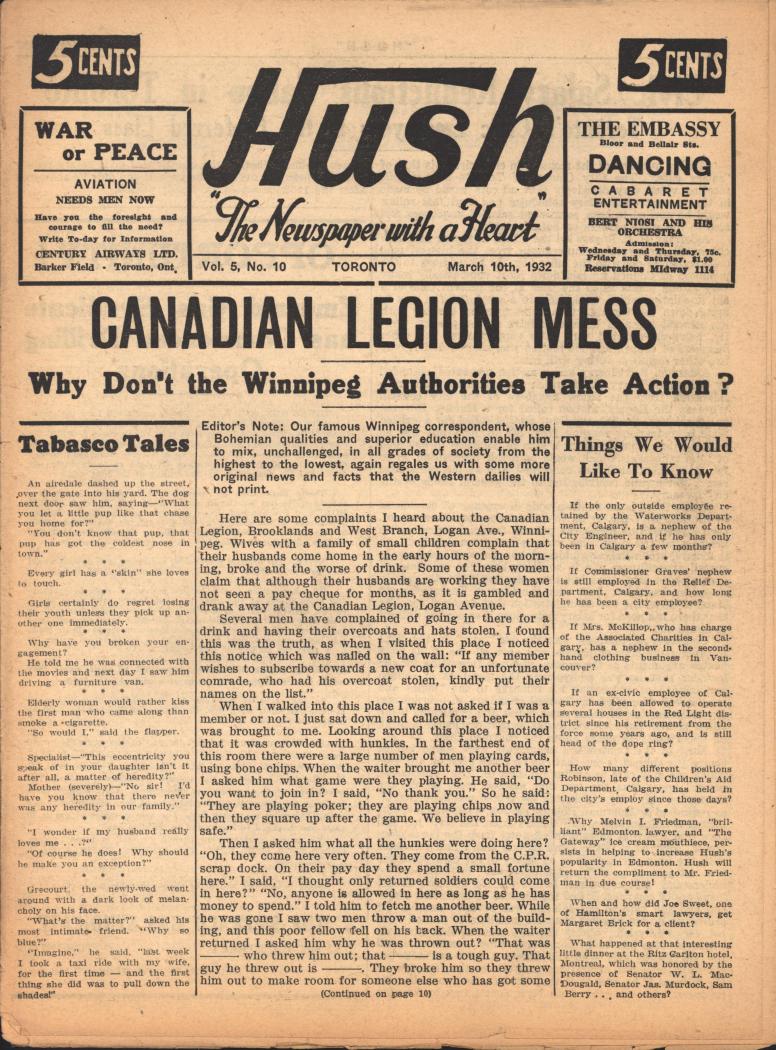 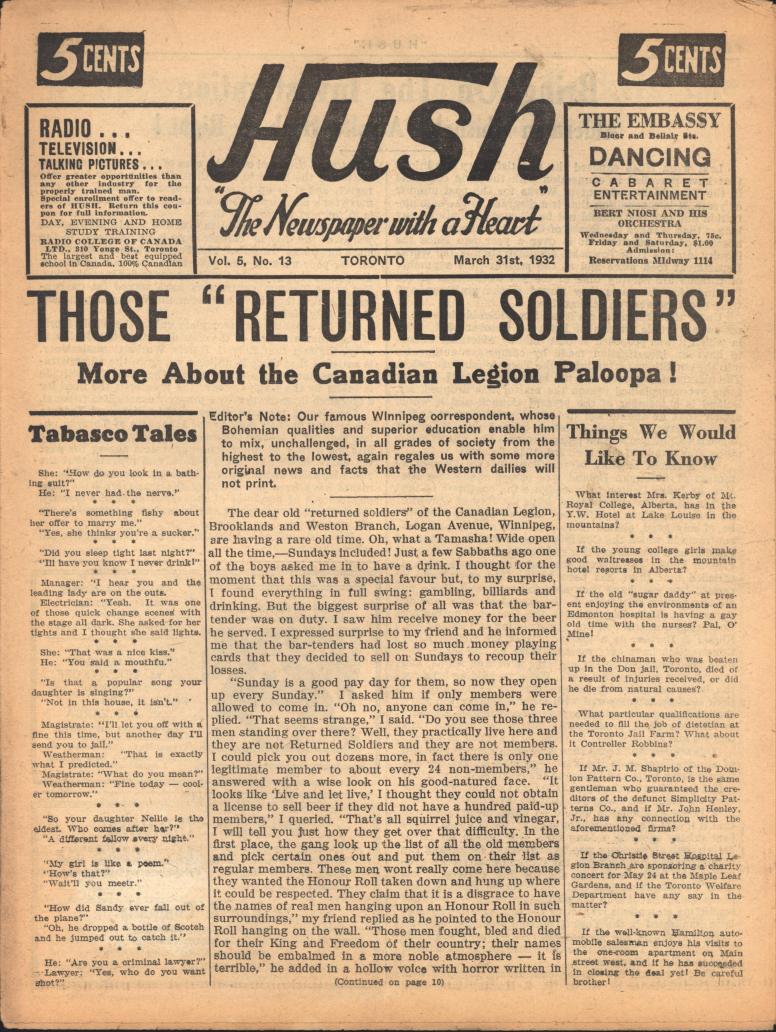 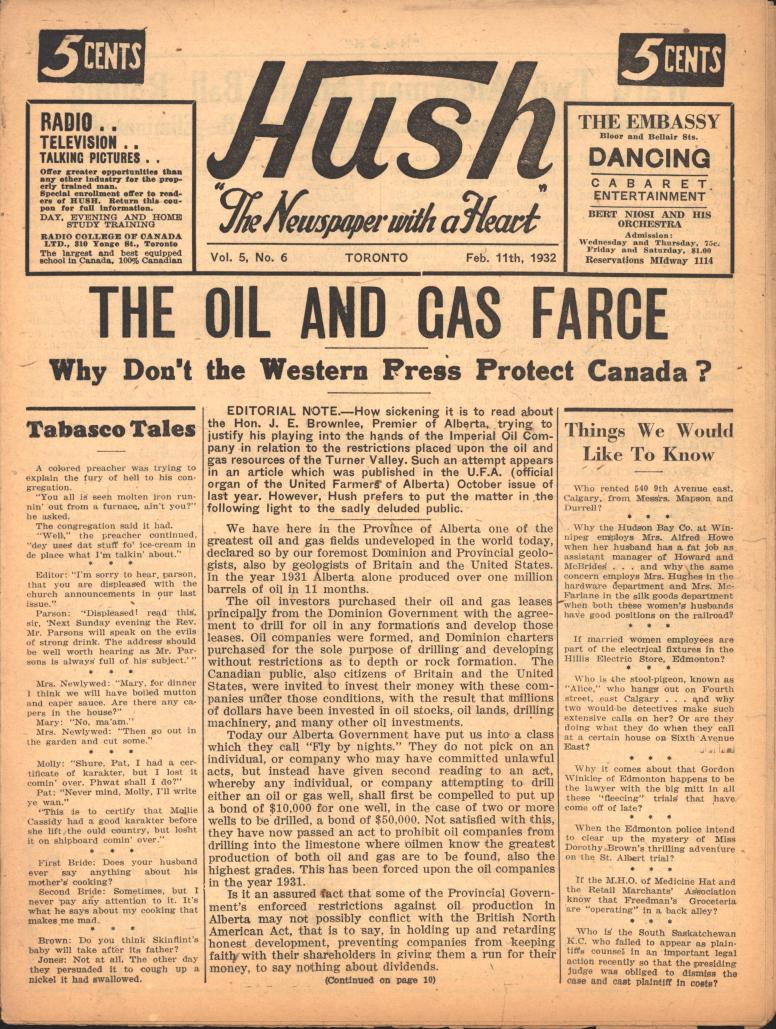 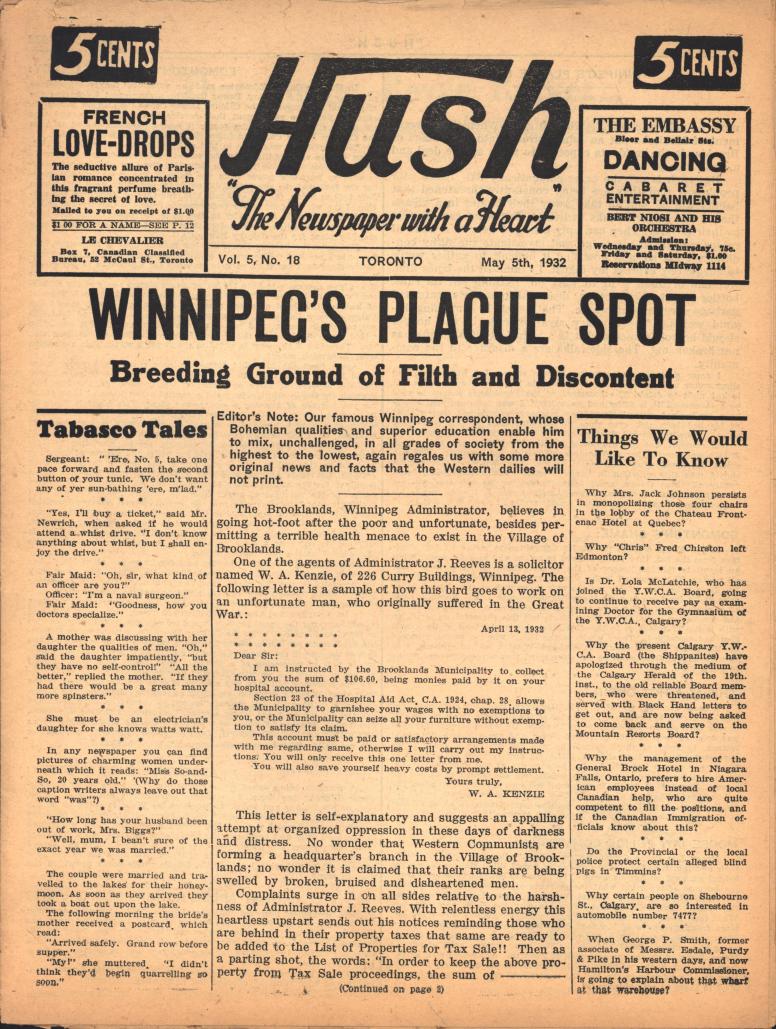 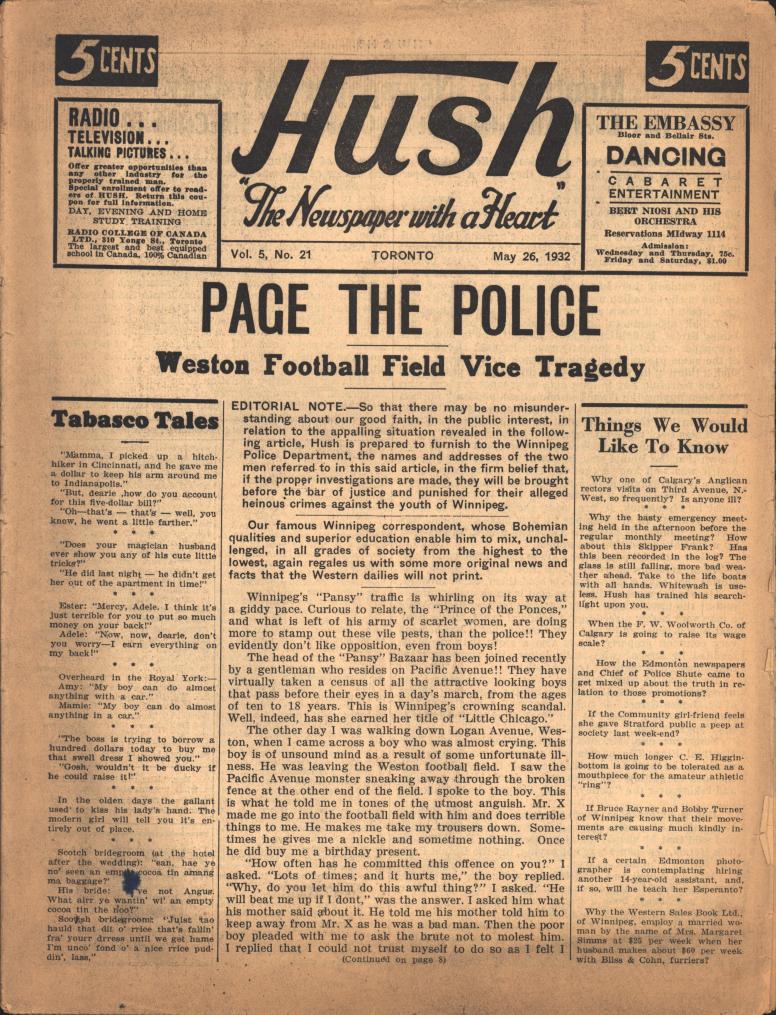 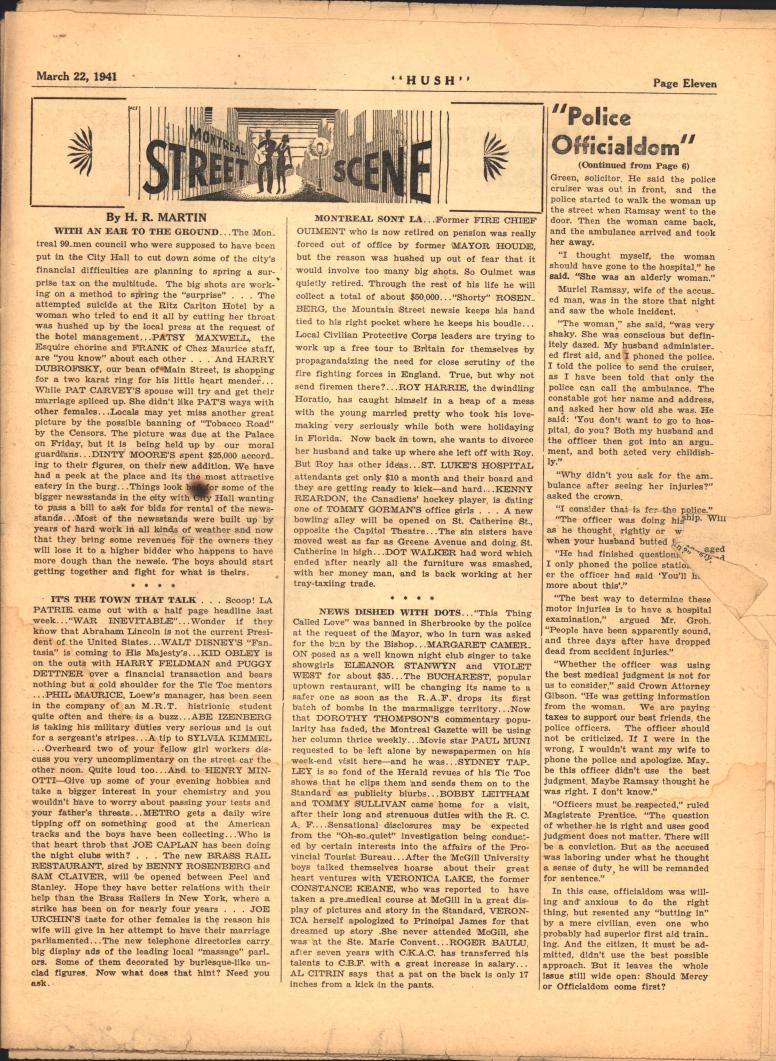 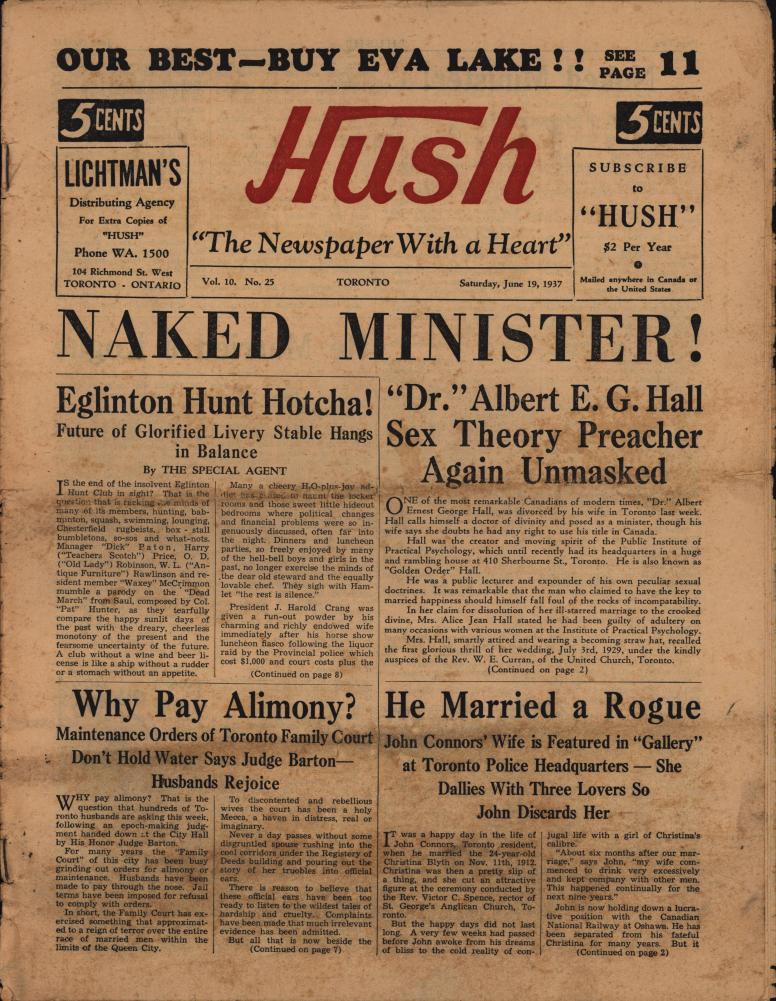 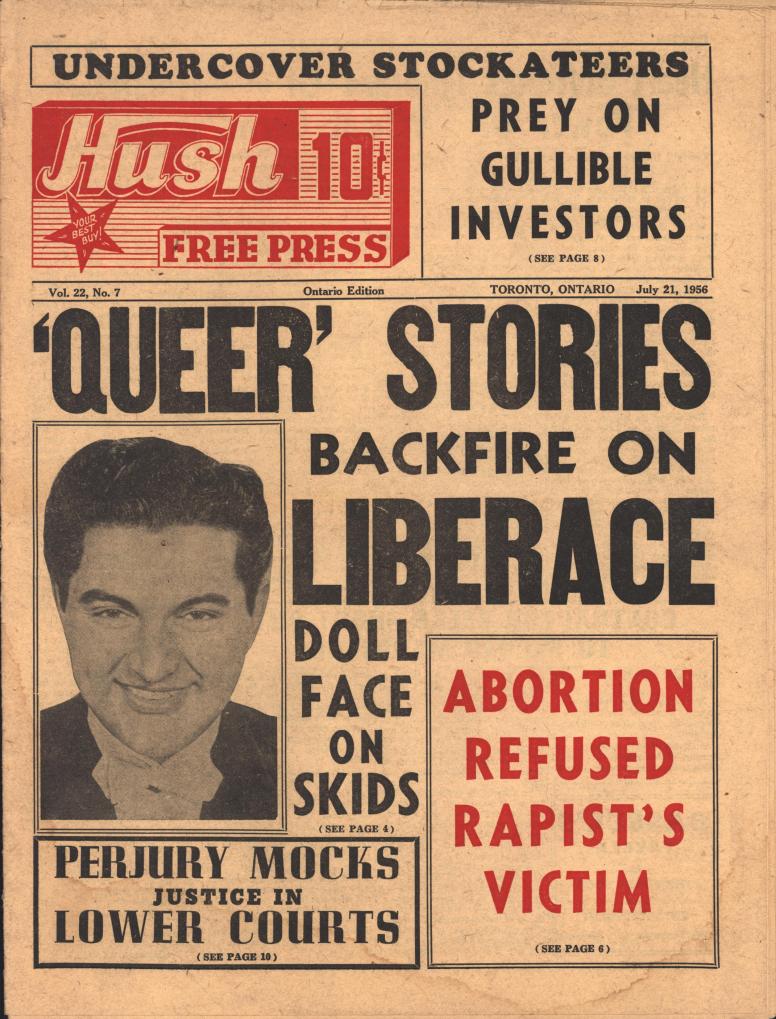 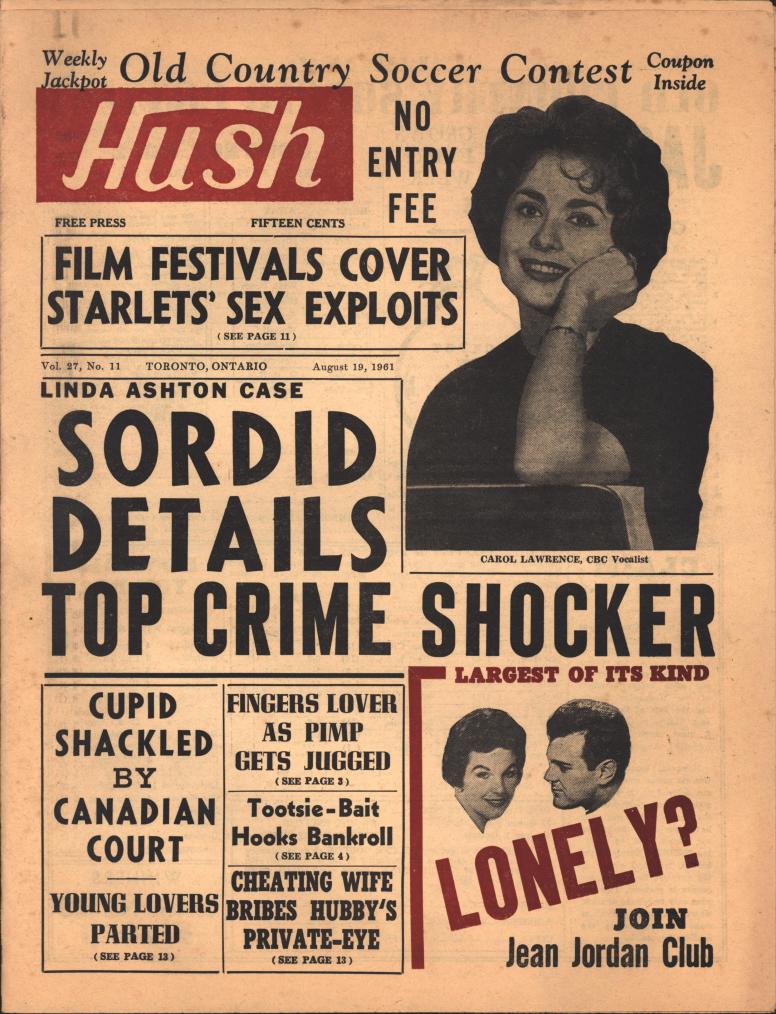 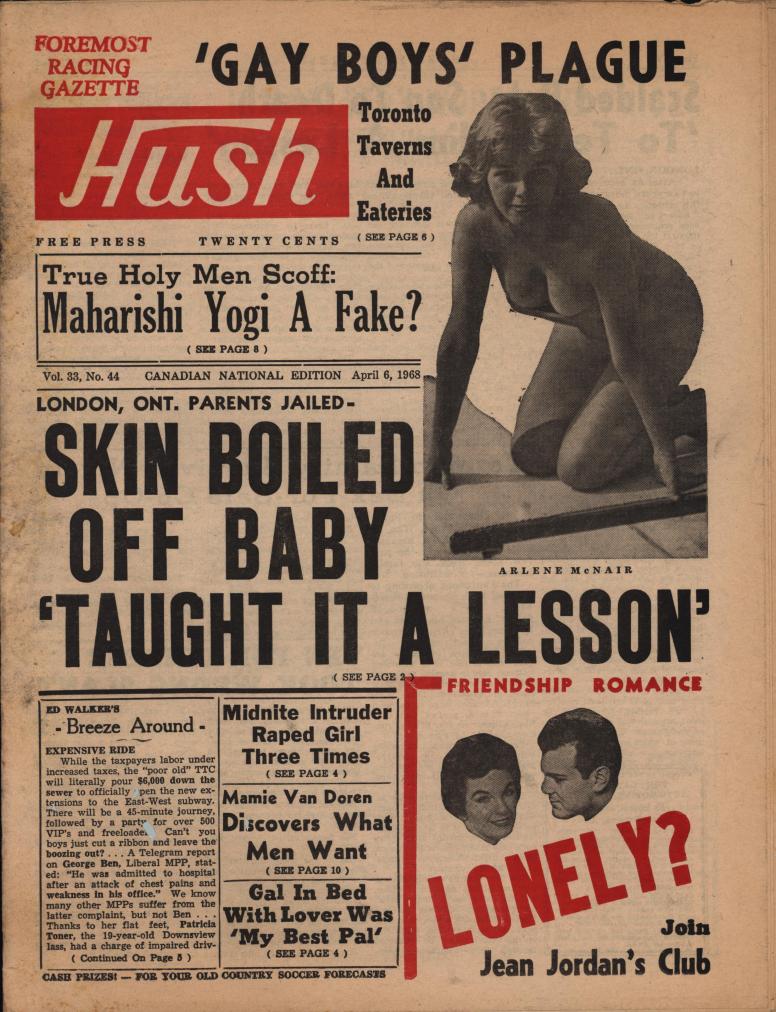